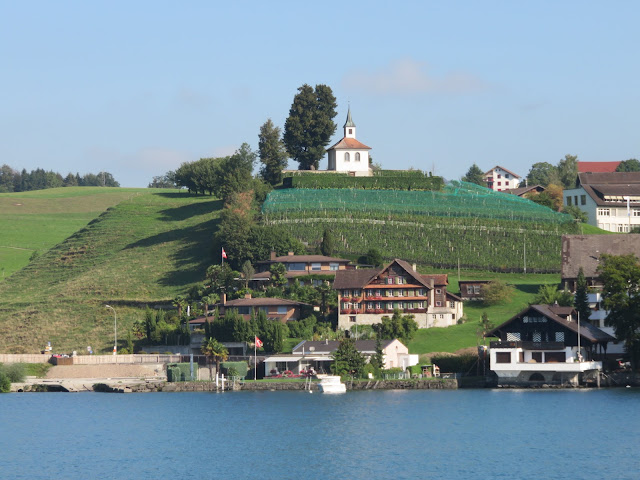 Train Zurich to Luzern
Paddle steamer down the lake to Brunnen
Walk through Brunnen
Train watching at Brunnen
Train Brunnen to Ersfelt
Train Ersfelt to Goschenen
Narrow gauge rack train Ersfelt to Andermatt
Postbus Andermatt to Meiringen
Narrow gauge rack train Meiringen to Luzern
Luzern to Zurich
We left Zurich early for Luzern and managed to catch the paddle steamer an hour earlier than planned. This gave us an hour's wiggle room for the day. The weather forecast for Andermatt was rain which would have made for a poor trip through the Susten Pass. We decided to keep our options open until we reached Goschenen. 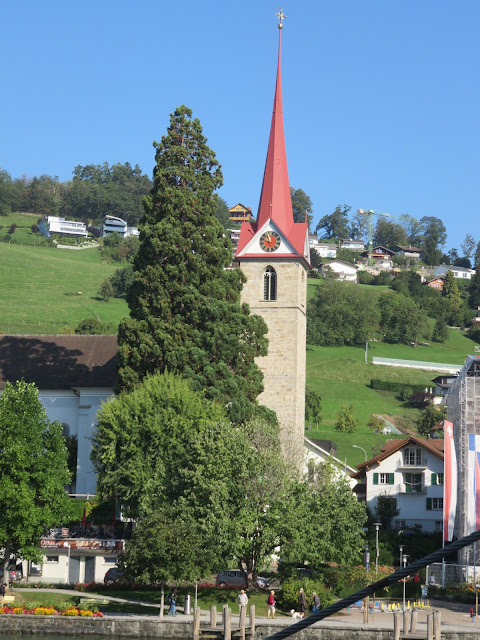 The two hour boat ride on a calm lake and under blue skies was delightful. We had a cappuccino in the lounge before going out on deck to enjoy the scenery. The boat wasn't crowded and many got off at the various small landing points as we made out way down to Brunnen.

At Brunnen we walked through the town, picking up a snack at the Coop on the way, and spent an hour and a half on the platform. There is a double track main with several sidings.  The normal running is left hand and there is a rough cycle of fast passenger, stopping passenger then freights every half hour or so. This is where trains can be regulated for movement through the Base Gotthard Tunnel. Things can quickly get ot of hand and one southbound freight train hauled by a DB Traxx locomotive was held at Brunnen and when it did get a path the margin was not good and two fast trains were delayed. The freight trains are short by north American standards but they move at speeds closer to the passenger trains so they cause less interference.
The following were all taken at Brunnen


From Brunnen we took a train to Ersfelt, formerly an important place for adding locomotives for the climb up to the old tunnel - now deserted, and then a train up to Goshenen, also pretty much deserted now. The weather looked fine so we took the MGB rack train up the steep grade to Andermatt where we took the Poat Bus to Meiringen.

As was to be expected the bus arrived at Meiringen 30 seconds ahead of schedule in spite of the various hold ups with traffic etc.

We caught a rack equipped train from Meiringen to Luzern and an SBB train back to Zurich.