A depannage truck drew up next to the car with a flat tire and we looked forward to some excitement. But the driver picked up a vehicle from the limousine place and drove off so the flat tire saga continued. 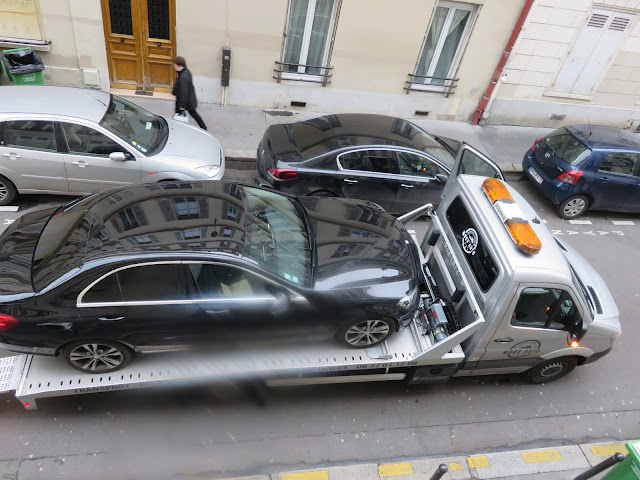 A little while later another depannage truck drew up against the car with the flat - and took another limousine away.

The weather was better today and we decided to go again to Notre Dame and walk around.  There were a lot of emergency vehicles around the St Michel bridge on the left bank. They were searching the fast flowing river and were joined by a helicopter. Turns out the police divers were doing an exercise and a woman diver went missing. They were still searching for the body this evening.

We decided to walk into the Marais but were not quite sure of the way until we came across people munching happily on a falafel.  The system is quite good - a man comes along the line, takes your order and payment and gives a ticket.  The server at the counter then just prepares the take out. The food is pretty good and very filling.

We then walked back through the Place des Vosges with its incredible archtecture and were intending to take the metro back from the Bastille.  However we saw a 29 bus going to Saint Lazare and decided to take that instead.  This was a different route from the 20 which we took the other day getting to the destination via the Palais Royal and the Opera.

Posted by Colin Churcher at 2:34 AM